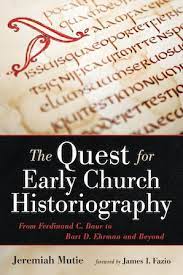 Abstract: The Quest for Early Church Historiography explores how early church historiography underwent a significant shift beginning with the thought of Ferdinand Christian Baur (1792-1860), a shift that eventually culminated in the current extreme historiographies of such scholars as Bart D. Ehrman (1955-). Through the tracing of this historiographical trajectory, this work argues that, rather than seeing these current historiographies as having suddenly appeared in the scholarly scene, a better approach is to see them as the fruit of this long trajectory. Of course, as the work has sought to demonstrate, this trajectory is itself full of turns and twists. But the careful reader will, hopefully, be able to see the intrinsic connections that are demonstrably evident.

Get the book here

Praise for the book:

“Jeremiah Mutie’s valuable study offers an important context for understanding the popularity of biblical critics such as Bart Ehrman. Mutie skillfully shows that ideas have roots, and the roots of modern biblical skepticism go back for centuries. I commend the author for this clear and insightful contribution to Christian historiography.”

“Did the Christian faith gradually emerge through the early centuries, a final triumph of one option over competing formulations? Or was there a singular, consistent rule of faith, an unsullied apostolic deposit that alone is found in the canonical Scriptures? . . . This is the one book I would read if I was concerned to understand the flow of the more recent history on the subject. Obviously, Mutie seeks to defend the integrity of the witness of Holy Scripture and the apostolic rule of faith.”

“In an era when scholars view faith commitments in historical writings as suspicious, Mutie shows that early church histories can still be recognized as credible and genuine. A regula fidei is restored here as central to an early Christianity which is multifaceted and diverse. Yet, it is also safeguarded, unified, and orthodox, and Mutie salutes it as he calls for a workable early church historiography that is balanced and refreshing.”

Dr. Jeremiah Mutie is Professor of Theology and Church History at Southern California Seminary in El Cajon, San Diego. He is the author of Death in Second-Century Christian Thought: The Meaning of Death in Earliest Christianity (2015). Dr. Mutie holds a ThM and PhD from Dallas Theological Seminary.