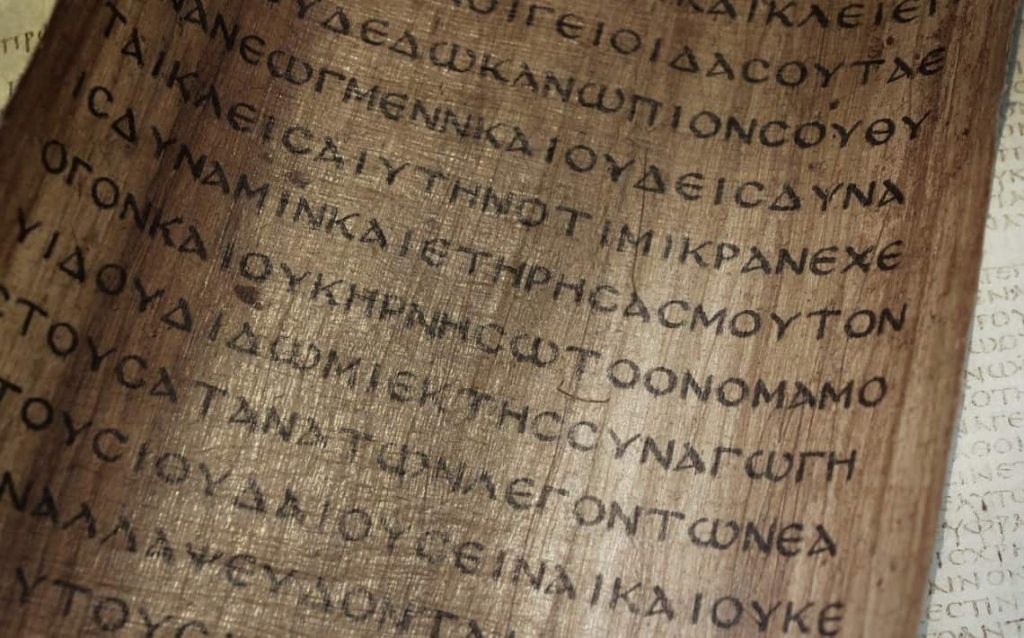 The Background of the Septuagint

To learn more about Southern California Seminary click here!
This second installment of the series, ” Is the Septuagint a Reliable Guide for New Testament Exegesis?”  To read earlier installments click here

As mentioned above, only a brief history can be given here regarding the Septuagint (LXX). When it comes to the generally accepted historical background of the LXX, the majority, if not all, we know stems directly from a second century document referred to as The Epistle (or Letter) of Aristeas. According to this letter, which is apocryphal in genre, Greek-Egyptian king, Ptolemy II Philedelphus, who ruled from 285–246 B.C., commissioned 70 (or 72) Jewish scribes to travel from Israel to Alexandria in order to translate the Books of Moses into Greek.[1] These were then given the Greek name, Pentateuch, meaning “five vessels.”
It is from these “70” Jewish scholars that the Latin numerical designation—LXX—came about as a short hand way of referring to the Septuagint.[2] This translation project was done in order to contribute to Ptolemy’s pride, his majestic “Library of Alexandria”—the world’s largest and most prestigious collection of literature at the time. After the Pentateuch was completed, other books from the Prophets and the Writings were done over time. According to Cox, “There seems to have been no hurry to translate the books outside the Torah, and the last books to be rendered into Greek, such as Job, may have had to wait until the end of the second century B.C.E., more than one hundred fifty years later.”[3] While the Letter of Aristeas indeed contains non-literal apocryphal aspects, Brotzman lays out important literal, historical details that can still be gleaned from the letter. These include: “The location (Alexandria, Egypt), the time (during the reign of Ptolemy Philedelphus, 285-246 B.C.), the initial extent (the Pentateuch), the parties involved (the Jews), and the nature of the effort (an officially sanctioned effort aimed at synagogue worship and instruction).” [4]

The scholarly opinion concerning the LXX’s contribution to the exegetical method (which includes textual criticism, see n. 3), carries with it two extremes. Some, termed “Maximalists,” see no issues with the LXX whatsoever when it comes to its reliability and applicability to exegesis.[5] These scholars, such as Joachim Schaper and Martin Rosel, understand the ancient Jewish scribes who translated the Hebrew Scriptures into Greek as experts in the science of exegesis motivated by nothing more than to accurately translate each Hebrew word into its closest Greek counterpart. Others, however, tend to see nothing but issues in the scribes’ translation process who relegate any disagreements between the Hebrew MT (Masoretic Text) and Greek LXX to purely linguistic conflicts, motivated by theological presuppositions between these two sources and the supposed Hebrew Vorlage.[6] These scholars, many from the notable University of Helsinki, Finland, are referred to as “Minimalists.” Yet, there is another group that attempts to pave a middle road, of which Albert Pietersma, referenced earlier advocates, which recognizes that certain theological changes between the LXX and the MT do exist, but that these changes are of non-essential quality and need to be discovered by a strict analysis of the text’s translation rather than any presupposed theological accusation. This group seems to be closer to the exegetical philosophy of the original LXX translators. As Jan Joosten, an advocate of this approach, observes: “When a divergence is observed between the Hebrew source text and its Greek translation, theologians are tempted to attribute it to theological reasons before envisaging any other type of explanation. This is poor method. The theological interpretation should not be the first one we reach for, but the last one, when more down-to-earth explanations fail.”[7]
___________________________________________________________________________________________________________________
[1] For an interesting survey concerning the debated provenance of these scribes (Egyptian or Palestinian), while leaning favorably toward the former, see Jan Joosten, “The Aramaic Background of the Seventy: Language, Culture, and History,” Bulletin of the International Organization for Septuagint and Cognate Studies [now The Journal of Septuagint and Cognate Studies or JSCS] 43 (2010): 54–56.
[2] The word “Septuagint” itself comes from the Latin septuaginta also meaning “70.”
[3] Claude Cox, “Some Things Biblical Scholars Should Know About the Septuagint,” 86. Cf. Brotzman, Old Testament Textual Criticism, 73.
[4] Brotzman, Old Testament Textual Criticism, 73. With this last note, Brotzman implies the intent of the 70 Jewish scribes was not solely to fill Ptolemey’s grand library at Alexandria. As Greek had by this time become the lingua franca of the Mediterranean world and beyond due to Alexander’s conquests, Hellenistic Jews needed to preserve their sacred writings in the language of the day viz. Koine Greek.
[5] Parts of this section was derived from Eric John Wyckoff, “When Does Translation Become Exegesis?: Exodus 24:9–11 in the Masoretic Text and Septuagint,” The Catholic Biblical Quarterly 74 (2012):676–78.
[6] The German term Vorlage (meaning “before stance”)  is used to denote an extremely ancient, prototype example of literature. Here, it refers to the original Hebrew Scriptures before work on the LXX begun. This supposed document (or documents) is generally thought to have been what the 70 used to translate the LXX.
[7] Jan Joosten quoted in Eric John Wyckoff, “When Does Translation Become Exegesis?: Exodus 24:9-11 in the Masoretic Text and the Septuagint,” 676.