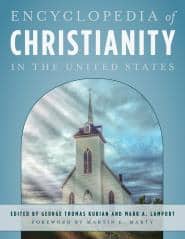 SCS is proud to announce that our own Dr. Gino Pasquariello and Dr. David A. McGee have each published articles contained in the newly released 5 volume Encyclopedia of Christianity in the United States edited by Edited by George Thomas Kurian, Edited by Mark A. Lamport.

From the founding fathers through the present, Christianity has exercised powerful influence in the United States—from its role in shaping politics and social institutions to its hand in inspiring art and culture. The Encyclopedia of Christianity in the United States outlines the myriad roles Christianity has played and continues to play. This masterful five-volume reference work includes biographies of major figures in the Christian church in the United States, influential religious documents and Supreme Court decisions, and information on theology and theologians, denominations, faith-based organizations, immigration, art—from decorative arts and film to music and literature—evangelism and crusades, the significant role of women, racial issues, civil religion, and more.
The first volume opens with introductory essays that provide snapshots of Christianity in the U.S. from pre-colonial times to the present, as well as a statistical profile and a timeline of key dates and events. Entries are organized from A to Z. The final volume closes with essays exploring impressions of Christianity in the United States from other faiths and other parts of the world, as well as a select yet comprehensive bibliography. Appendices help readers locate entries by thematic section and author, and a comprehensive index further aids navigation.

Relishing these richly informative pages, I was reminded of Oscar Handlin’s notable claim that immigrants were America. The Encyclopedia of Christianity in the United States does not suggest that Christians are America, but it demonstrates in impressive detail just how wide-ranging Christianity’s influence on America has been.— Robert Wuthnow, Princeton University

Encyclopedias are among the great tools of modern knowledge-making, all the more so when forged by hands as experienced as those of Kurian and Lamport. As a reference guide to Christianity’s variegated history and ongoing expression in the United States, these volumes stand out for their breadth of coverage and range of perspectives. Capsule biographies, denominational overviews, thematic analyses—all these and more can be found in this compendious collection.— Leigh E. Schmidt, Edward C. Mallinckrodt Distinguished University Professor, Washington University in St. Louis

The Encyclopedia of Christianity in the United States will be a most valuable resource for anyone who wants to find reliable information on the history or current state of Christianity in this country. It is up to date and intelligently organized. It reflects the insights of an impressive board of editors.— George Marsden, professor emeritus, University of Notre Dame

This encyclopedia is a highly useful, comprehensively imagined resource for students, teachers, and the general public who want to learn about the future of Christianity by better understanding its past in American history. The five-volume work is rooted in twenty-first-century realizations and concerns about Christianity—its size and demographic patterns, its influence and role in society, its multiple forms and stunning internal differences—as it retrieves the past and smartly represents key historical themes and forces throughout U.S. history. Christianity is changing dramatically right before our very eyes, and inventive, comprehensive resources like this one will provide enlightening historical and cultural insights that bear on the present. I found myself immediately drawn to this encyclopedia for two compelling reasons: First, diversity is conceptually fundamental to the content, evident in the outstanding line-up of editorial advisory board members and in the range of topics found in the table of contents; and second, creativity is driving the organizational logic and global reach of the project, with snapshots, impressions, profiles, and so on that keep the reading lively and grounded.— Gary Laderman, chair and Goodrich C. White Professor of American Religious History and Cultures, Emory University

This multi-volume set creatively explores the diversity and depth of Christian expression in the United States. With entries written by a broadly trained and accomplished group of scholars, it moves well beyond traditional understandings of what is Christian, or even what is traditionally “religious.” Best of all, it uses fresh angles of vision to shed new light on both historical developments and current events, including views of Christianity from outside the nation and abundant charts and images. This is a gold mine of an encyclopedia that will keep the reader exploring and discovering for a long time to come.— Laurie Maffly-Kipp, Archer Alexander Distinguished Professor, John C. Danforth Center on Religion and Politics, Washington University in St. Louis