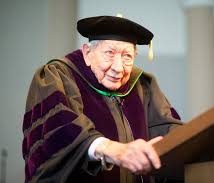 I’ve been fortunate in my Christian experience to cross paths with a handful of remarkable men who have modeled for me what it means to be a faithful and steadfast teacher of God’s Word. Dr. George W. Hare, Sr. was one of those special saints that I like to refer to as heavenly treasures hidden in earthen vessels. In our present day, his life stands as a testimony of what it looks like to live a faithful life of service to God and to man.

Like so many other young men, I first met Dr. Hare in the classroom. It was nearly twenty years ago. Back then, he stood a little taller, and his deep baritone voice boomed a little louder. With mixed emotions I first stepped foot into his class. He was a bit of a local legend, stern and exacting in his expressions, and yet that exterior betrayed his underlying tenderness. The true proverbial gentle giant. The ideas he conveyed, and the words he used to express them left a giant footprint, and reverberated in my consciousness, long after I exited the classroom.

Speaking of the classroom, the seminary facilities were not what they are today, with state-of-the-art technology and comfortable seats in a climate-controlled room. I recall when I first stepped foot into his class, it was a particularly smoldering summer in El Cajon—which, if you didn’t know, is Spanish for “the box”, and that summer, it would have been more appropriately referred to as “El Cajon caliente”. Despite that the seminary classes were held at night, this one ran from 4-7pm on a blistering Summer night in the top floor of a building with no air-conditioning, so it may as well have been in the heat of day. In fact, the classroom would have been cooler at the noon hour, before the Summer sun could run its full arc over the building, creating a “hot box” effect in the classroom.

This wasn’t my first class at SCS, so I had experienced these classrooms before and knew what I was in store for, so I dressed for the occasion. Ever true to my native San Diegan heritage, I walked into class wearing shorts with a tank-top and Birkenstocks on my feet. While the cool summer-attire clothing helped me make it through the first 90 minutes of lecture, it also earned me a personal invitation from Dr. Hare who called me aside during the break to say to me: “This is seminary, not the beach; when you come to class you should dress appropriately.” I took careful note to never again come to class dressed in beachwear, even if it did sometimes feel more like visiting the beach than a cool classroom. And that was the first lesson Dr. Hare taught me, though it was by no means the last.

But in all seriousness, Dr. Hare’s influence on my life was profound. With a careful dispensational eye on the text and with a heart to communicate God’s Word in a way that affects change in the hearer, Dr. Hare was truly a model Bible teacher. Fewer than ten years ago, he was teaching classes at Southern California Seminary, where he had faithfully taught for so many decades, and was lecturing two classes back to back, for up to six consecutive hours in a single night.

Dr. Hare loved to teach, and specifically to prepare the next generation of Bible expositors. He poured himself into Southern California Seminary, in a way that, to me, always conjured images of Paul’s usage of the Greek term spendomai (to be offered, poured out, as a drink offering). I have a more recent memory, from not many years ago where I found myself helping Dr. Hare clear out his office at the seminary, and going through one drawer or box after another that contained a new business card with his name, all of which had different titles:

And whether he had a card for it or not, I watched him perform just about every task that needed performing at the seminary, including janitorial duties, more than once. Dr. Hare truly poured his life into the seminary and into the next generation of pastors and teachers that he knew would be the ones proclaiming God’s Word when he could do so, no longer. And I can imagine this may not have looked too different than how the Apostle Paul might have appeared to those looking on, when he wrote to the Philippians “I am being poured out (as a drink offering) on the sacrifice and service of your faith” (2 Phil 2:17), and again in his letter to Timothy “I am already being poured out as a drink offering, and the time of my departure is at hand” (2 Tim 4:6). I’m quite sure that this isn’t far off, as Paul’s words to young Timothy do well to sum up the message of Dr. Hare’s life to his students. Allow me to offer them here, with a view to the witness of Dr. Hare’s faithful example of service to Christ:

I charge you therefore before God and the Lord Jesus Christ, who will judge the living and the dead at His appearing and His kingdom: Preach the word! Be ready in season and out of season. Convince, rebuke, exhort, with all longsuffering and teaching. For the time will come when they will not endure sound doctrine, but according to their own desires, because they have itching ears, they will heap up for themselves teachers; and they will turn their ears away from the truth, and be turned aside to fables.  But you be watchful in all things, endure afflictions, do the work of an evangelist, fulfill your ministry.

For I am already being poured out as a drink offering, and the time of my departure is at hand. I have fought the good fight, I have finished the race, I have kept the faith. Finally, there is laid up for me the crown of righteousness, which the Lord, the righteous Judge, will give to me on that Day, and not to me only but also to all who have loved His appearing. (2 Tim 4:1-8)

I thank the Lord for His faithful ones, who have gone before us and demonstrated how we should carry out our lives to the glory of God. Thank you, Dr. Hare, for being that heavenly treasure hidden in an earthen vessel.

Academic Dean of Bible and Theology