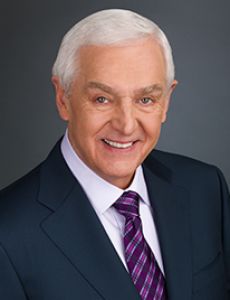 Dr. David Jeremiah, is Chancellor for SCS, founder of Turning Point Radio and Television Ministries and senior pastor of Shadow Mountain Community Church, felt God’s calling on his life at a very early age. Born February 13, 1941 in Toledo, Ohio, Dr. Jeremiah was raised in a family deeply committed to ministry. At the age of eleven, Dr. Jeremiah and his family moved to Dayton, Ohio where his father, Dr. James T. Jeremiah, was the Pastor of Emmanuel Baptist Church, and in 1953 became the President of Cedarville College in Cedarville, Ohio.